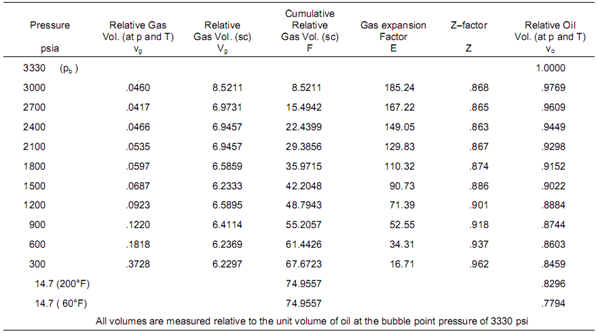 After the pressure drop from 2700 to 2400 psia, column 2 of the table indicates that 0.0466 volumes of gas are taken off from the cell at the lower pressure and at 200°F. These gas volumes vg (small v) are measured relative to the unit volume of bubble point oil, as are all the relative volumes listed in the table. After each stage, the incremental volume of liberated gas is expanded to standard conditions and re−measured as Vg relative volumes (column 3). Column 4 is simply the cumulative amount of gas liberated below the bubble point expressed at standard conditions.

Dividing values in column 3 by those in column 2 (Vg/vg) gives the gas expansion factor E (column 5). Thus the 0.0466 relative volumes liberated at 2400 psia will expand to give 6.9457 relative volumes at standard conditions and the gas expansion factor is therefore 6.9457/.0466 = 149.05. Knowing E, the Z-factor of the liberated gas can be determined by explicitly solving the following equation:

These values are listed in column 6.

Finally, the relative oil volumes, vo, are measured at each stage of depletion after removal of the liberated gas, as listed in column 7.

* This example is from the book “Fundamentals of Reservoir Engineering”.

Primary Results from a Differential Liberation Experiment Performed on an Oil Mixture could be summarized as per below: