To understand the complex behavior of a reservoir fluid ” Hydrocarbon Phase Behavior “, let’s, first of all, consider the simple case of a single-compound hydrocarbon, ethane for example, initially in gas form in a cell containing mercury. As mercury is gradually injected, the gas is subjected to a continuously increasing pressure. The temperature is held constant. Actually, isothermal conditions simulate a reservoir’s generally constant temperature. At some unique pressure – the vapour pressure – the gas will condensate into a liquid. 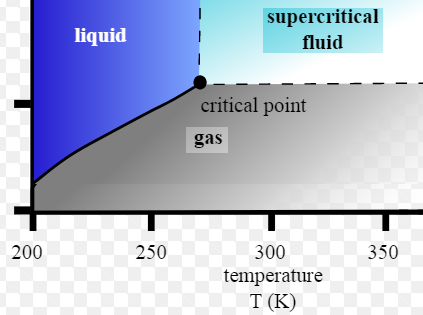 Vapour Pressure line: is the line defining the pressures at which the transition from gas to liquid occurs. Above this line, the single-compound hydrocarbon exists as a liquid, below as gas.

Critical Point: is the point at which it is no longer possible to distinguish whether the fluid is liquid or gas. The intensive properties of both phases are identical.

Naturally occurring hydrocarbons are more complex than the system shown above. They contain much more members of paraffin series and usually some non-hydrocarbon impurities. Nevertheless, a phase diagram can similarly be defined for complex mixtures. A typical diagram for a natural gas is shown in the following graph: 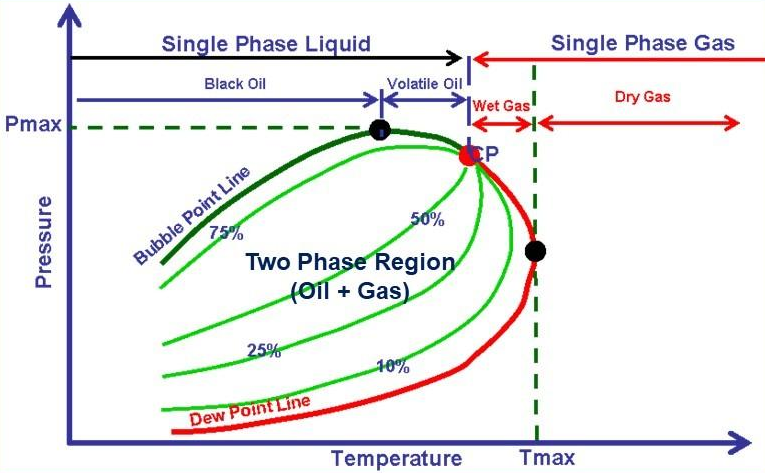 Multicompound hydrocarbons phase diagram shape depends on the composition of the mixture.

The maximum temperature of the two-phase envelope is called the cricondentherm.

In a gas well, if the reservoir temperature exceeds the cricondentherm, only dry gas will exist in the reservoir throughout production. This same gas produced to surface conditions falling within the envelope will become a mixture of gas and liquid.

If the temperature of the gas reservoir is below the cricondentherm, a transition called retrograde condensation occurs: oil condenses with decreasing rather than increasing pressure. This type of reservoir is appropriately called a retrograde gas condensate.

In an oil reservoir at a temperature below the critical point, only liquid oil containing dissolved gas exists above the bubble point. When this oil is produced to the surface, gas comes out of solution, the amount depending on surface conditions. Since all the produced gas comes out of solution, surface volumes of gas and oil are easily related to volumes at reservoir conditions.

The following video further details the concept of phase behavior and fluid properties.