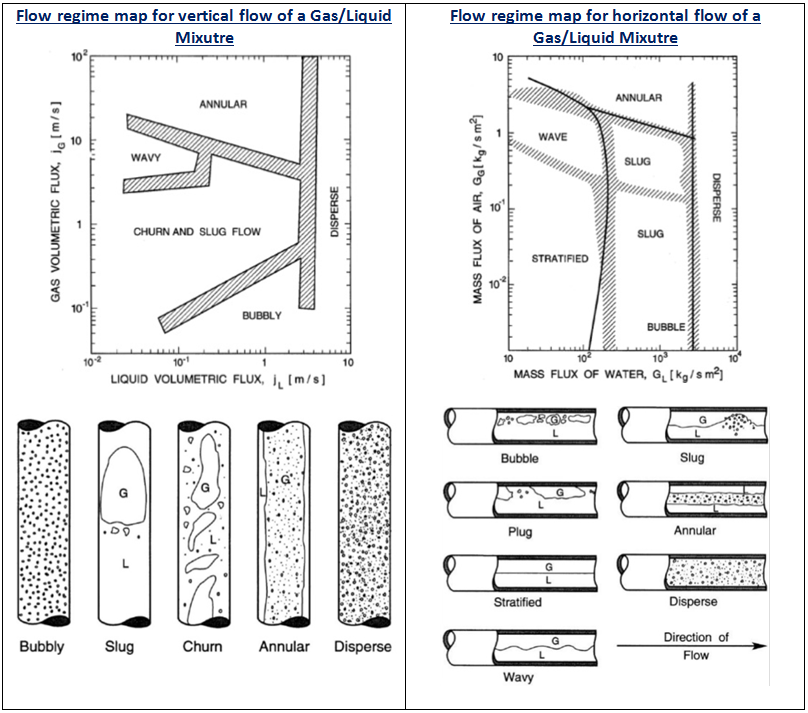 The gas phase is distributed in the liquid phase as variable-size, deformable bubbles moving upward with zigzag motions. The wall of the pipe is always contacted by the liquid phase.

Most of the gas is in the form of large bullet-shaped bubbles that have a diameter almost reaching the pipe diameter. These bubbles, called Taylor bubbles, move uniformly upward, and are separated by slugs of continuous liquid that bridge the pipe and contain small gas bubbles. The gas bubbles velocity is greater than that of the liquid.

If a change from a continuous liquid phase to a continuous gas phase occurs, the continuity of the liquid in the slug between successive Taylor bubbles is destroyed repeatedly by a high local gas concentration in the slug. This oscillatory flow of the liquid is typical of churn flow. This flow regime may not occur in small-diameter pipes.

During annular, the liquid phase flows regularly as an annular film on the wall with gas flowing as a central core. Some of this liquid is entrained as droplets in this gas core (mist flow).

The following video demonstrates common liquid-air flow regimes that can be established in pipes at various liquid and air flow rates and various angles of pipe inclination: