This article helps understand the difference between Conventional & Mark II pumping units in term of production performance. SROD, the predictive program from General Electric (GE), has been used in order to compare the Reducer Torque Performance,  the Stroke Length, and the Polished Rod Velocity, of a conventional unit and a Mark II unit. In order to do that, production data from the well MF-1 are used.

SROD, the predictive program from GE, has been used in order to compare the reducer torque performance of a conventional unit and a Mark II unit. The plots “Torque (in in-lbs) versus the crank angle” are depicted in the following graph.

Note that the MKII does a better job approaching the uniform torque goal than the conventional unit and therefore has lower peak torque. 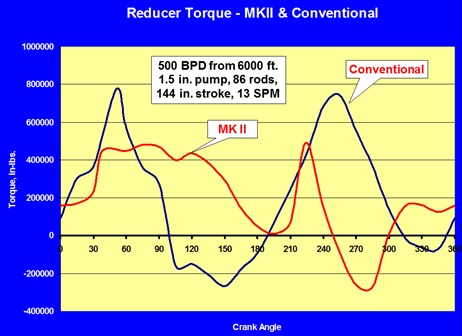 This graph illustrates the torque required to lift the 500 BPD from 6000 ft. over a number of different stroke lengths for both the conventional and Mark II units. 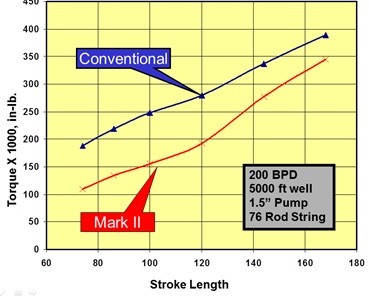 Note that the Mark II requires less torque to do the same job for each stroke length.  This is a common feature of the Mark II.

This graph illustrates the number of degrees of crank rotation required to create the upstroke for the Mark II, the conventional and Reverse Mark (RM) units. 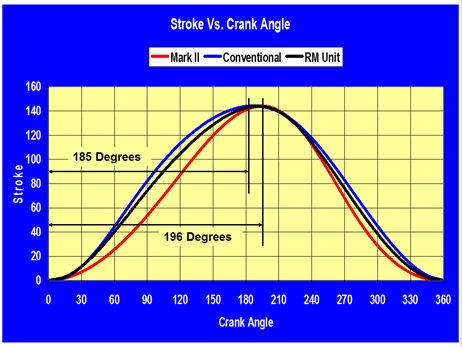 This graph illustrates the relative polished rod velocity of both the conventional and Mark II pumping units throughout the complete stroke. 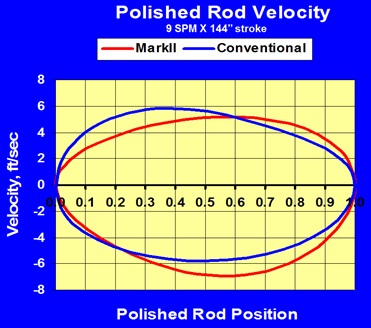 The lower acceleration on the upstroke of the Mark II clearly result is lower velocity for over 50% of the upstroke.  This is returned to the cycle during the downstroke where the MKII is faster than the conventional for over 70% of the down stroke.

This faster downstroke of the MKII could cause more damage to a pump and rods if the pump was not filling properly with fluid because the pump plunger would hit the fluid at a higher rate of speed causing a shock to the system.  Incomplete pump fillage can be sensed by a pump-off controller (POC) and the pumping unit shut down before damaging the pump and rods.