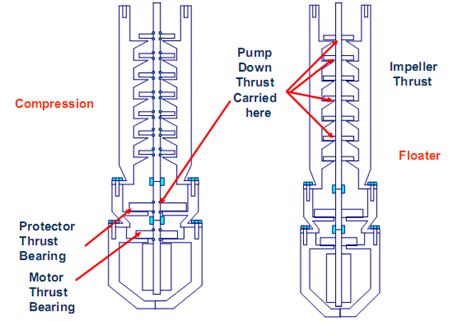 In a compression pump, all the impellers are rigidly fixed to the shaft. Therefore, if an impeller wants to move up or down, it will take the shaft with it.

The impellers are located so that they are running with a clearance to the diffuser above and below it. Consequently, the impeller thrust (FI) is transferred to the pump shaft. The seal section thrust bearing has to carry the total thrust (Total thrust = Impeller thrust + Shaft thrust). This is why a high load bearing may be required in the seal section.

The impeller is normally sitting down on its lower diffuser during assembly due to gravity.  Because of this, the pump shaft is “raised” with shims in the coupling so that the impeller is not allowed to touch the diffuser after final assembly. This allows all thrust developed in the pump shaft to be transferred to the protector shaft directly.

Pump shimming: There is a small amount of free play in the coupling such that the pump shaft can fall down to where the impellers ride directly on the lower diffusers or on the downthrust washers if available. 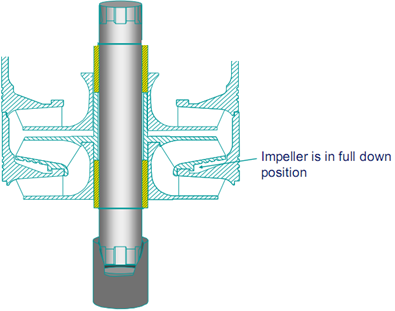 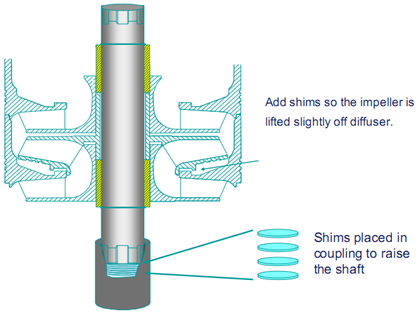 Why use Compression Pumps?

Since a floating impeller is free to move up and down the shaft, the only thing to stop it is either the upper or lower diffuser.  “Thrust washers” are provided at all mating surfaces between the impeller and diffuser to absorb any thrust generated.

The stage carries and absorbs the impeller thrust. The thrust is transferred through the thrust washers to the diffuser to the housing. Therefore, the seal section only sees the shaft thrust.

NB: One misconception is that the impeller floats between the diffuser thrust surfaces at the optimum flow rate. When the impeller reaches or nears its balanced thrust point, it will become unstable and begin to oscillate up and down. Therefore, they are designed to be stable in slight downthrust at their optimum design flow rate and to pass through this transition region at a higher flow rate. A typical centrifugal pump thrust. 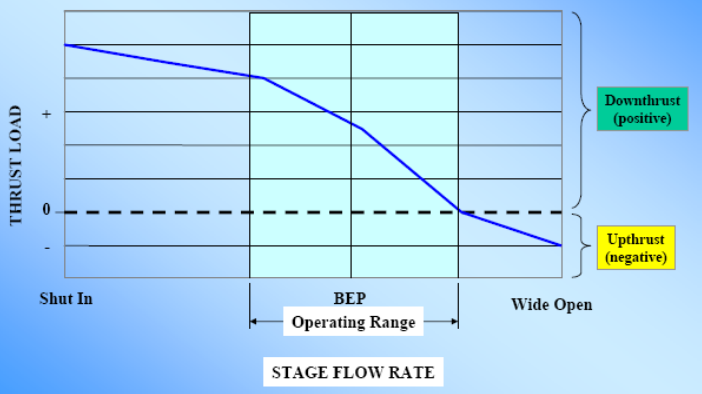 Why Use “Floater” Pumps?